GIVEAWAY: The Snowman and The Snowdog DVD! -CLOSED- 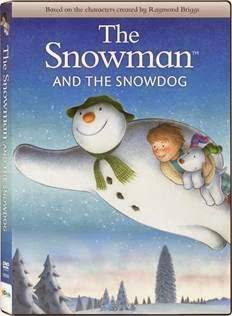 with my family. First of all the music is soooo beautiful!  There is no dialogue and yet the story is so touching.  My kids were mesmerized the entire time.  We got a little snow the other day and my son went out in his pajamas and gloves to make a Snowman and a Snowdog…lol  This show is definitely on our holiday tradition list now.  I don't know how they did it, but they made a sequel that is just as good as the original!

About the DVD:
When a young boy and his mother move to a new home, the boy discovers a secret box hidden under the floorboards of his bedroom. In the box, he finds a hat, scarf, some lumps of coal and a shriveled tangerine – it’s a snowman-making kit! Later that day it starts to snow. The boy builds a snowman, and with a little spare snow left over, a Snowdog. That night they come to life and take him on a wonderful adventure. As dawn breaks they fly home, but before the boy returns to bed a magical surprise awaits him…

Raymond Briggs’ iconic children’s book The Snowman follows the wonderful adventures of a young boy and the remarkable Snowman he creates. Adapted for the screen in 1982, the Oscar-nominated film has enchanted generations of children. On the 30th anniversary of the original film, Briggs has given his blessing to this brand-new sequel. The magic is about to begin all over again, this time with a new set of friends.

You can find The Snowman & The Snowdog

One reader will win The Snowman and The Snowdog DVD! US only a Rafflecopter giveaway

Tara Oliver said…
This looks like a cute movie. We need more Christmas movies at our house!
November 6, 2013 at 1:44 PM

Debbie Lewis said…
This looks like a movie my grandkids would love to watch
November 6, 2013 at 3:46 PM

Anonymous said…
Looks like a cute movie :) I'm sure one of my nieces or nephews would love this!

Anonymous said…
This is super cute natbelinsky@vison.net
November 6, 2013 at 5:58 PM

Coolestmommy said…
My kids would LOVE to watch this on our two day trip to Grandma's house at Christmas.
November 6, 2013 at 6:15 PM

Laine said…
This movie is a Christmas tradition at my mom's house. She plays the soundtrack while the tree is being decorated and the movie is usually on during the entire Christmas season. I am actually shocked that I do not already have a copy of this movie.
November 6, 2013 at 6:54 PM

Jeni Gimbut said…
The puppy looks so cute. My nieces love the movie "A Stranger In The Woods," which is also about a snowman. I bet they would love this one too.
November 6, 2013 at 7:33 PM

ossmcalc said…
This would be a great Christmas movie for my grandson.

Colleen Maurina said…
I love the Snowman so am really looking forward to this!
November 6, 2013 at 8:40 PM

Unknown said…
My kids would love this! Thanks for the chance. amypugmire@live.com
November 6, 2013 at 9:53 PM

Laura said…
The Snowman was my favorite Christmas movie as a child; I loved, and still love, the musical score.
November 6, 2013 at 11:20 PM

laurie nykaza said…
the kids would all love to see this at Christmas looks like a wonderful dvd
November 7, 2013 at 1:15 AM

Unknown said…
The Snowan and Snowdog looks like a cute movie for my granddaughter!
November 7, 2013 at 9:36 AM

Sandy said…
The Snowman (book and video) was always a hit with my children. I would love to now share this with my grandson!
November 7, 2013 at 9:46 AM

Unknown said…
This movie The Snowman and The Snowdog sounds like a great family movie and I believe that me and my granddaughters would love to see it and discover what was found in the box under the stairs, sounds like fun.
November 9, 2013 at 9:01 AM

Kelly Tillotson said…
i know my children would love this. we love watching christmas/winter movies with hot cocoa and popcorn for family nights. thank you!
*kelly
kelly-tillotson@hotmail.com
November 10, 2013 at 12:40 PM

Vikki Billings said…
I would love to win this so that I can watch it with my grandchildren. Thank you for the great giveaway!
vikki.billings@yahoo.com
November 12, 2013 at 11:03 AM

GeorgiaBeckman said…
We have THE SNOWMAN, dvd, but I would love to have The Snowman and The Snowdog! Thank you for hosting!
November 12, 2013 at 11:51 AM

Unknown said…
We just love to pop popcorn and watch movies on a cold winters night at Gradma"s
November 12, 2013 at 3:36 PM

Emily Wells said…
This looks like such a sweet movie! It would make a great Christmas present for my three boys. :)
November 12, 2013 at 8:11 PM