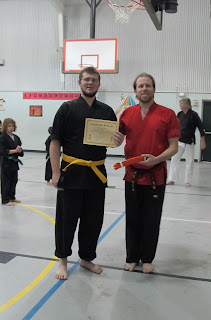 Fort Concho Karate in need of donations to
supply a raffle or silent auction
request from Tara:

Fort Concho Karate is in San Angelo, Texas. We are a low-cost karate program that meets at the Fort Concho Elementary gym thanks to the principal, Lori Barton. It costs $10 per month per student with no belt fees, and the fourth student from any family attends for free. We never turn anyone away for the inability to pay. The Fort Concho Open is the name of the tournament. We are holding it to raise funds for the program so that we can buy more equipment for the class. It will be held August 18. Anyone who is interested can contact us through our facebook page at Facebook.com/FCKarate or by e-mail to fortconchokarate@gmail.com. I am looking for any kind of item to go into a raffle or silent auction. I am happy to set out literature from any business/blog that donates to help spread the word about the venture.

Riley passed away earlier this year just before his 20th birthday from cancer. He had been a student of my husband's since he was 12 years old. He went to the hospital one day because he was not feeling well. He had just started a new job and did not yet have health coverage. The doctors discovered he had cancer in his abdomen and scheduled surgery for him. When the operation took place, the doctors realized that it was advanced past what they could care for here in San Angelo and had him airlifted to a larger hospital in San Antonio, Texas, where he had another operation. Unfortunately, his body began to shut down and within two weeks of his first hospital visit he passed away.  His brother still attends classes with us, so we see his parents twice a week.  We know the bills are overwhelming, and we want to help our own as much as we can.
.