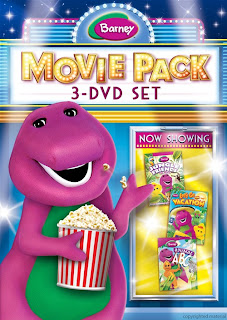 , I wondered how long this purple dinosaur has been around.  I knew it had been a while and that he was not popular when I was a a little kid.  Turns out that a woman from Dallas created Barney in 1987. The show was popular in parts of Texas for several years until PBS picked it up in 1992. It's been a sensation ever since!

My son and I are just discovering him now. We were getting ready for a trip to Texas when I was asked to review the DVD's.   I was at Smith's the other day and realized this set of DVD's retails for about $17.00.  You can also get it from Amazon for $14.49.

These DVD's distributed via HIT Entertainment and Lionsgate and adorable, educational and keep the interest of a 2 year old! This Movie pack is new material that just came out last month.  It takes you through an adventure with Barney and his friends as they travel to the Rainforest, learn the ABCs and take a vacation to exotic lands.  Luckily my son is drawn to anything having to do with Spanish and ABC's.  These DVD's helped to keep him engaged all while learning a little something new.

The movies included tell tales of the gang in a rainforest observing insects, animals and the plant life. The bonus features in this DVD include a match game and growing your own garden!  The other DVD as mentioned above helps with the ABC's.  The gang engages everyone in coming up with an animal that starts with each letter of the alphabet.  They made up only one animal: for the letter U: Unicorn!  My favorite one was the DVD about going on vacation.  After all, that is what my family and I were about to do!  Barney shows us how to pack a suitcase and how to sing a few songs in Spanish.

A totally recommended DVD set for a great price! 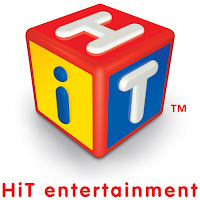