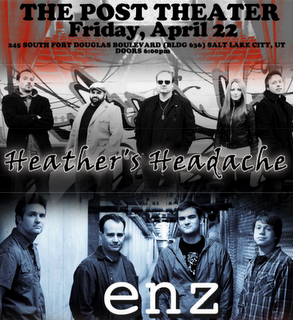 UPDATE:  This event is tomorrow night!  Also come hungry because Cafe Rio and Ben & Jerry's will be there!!  They will also donate a portion of their sales to the cause!
Zions Bank presents an evening with Heather's Headache of Washington, D.C. and guest band ENZ, of Salt Lake. A portion of the proceeds will benefit an orphanage organization designed to raise the quality of care at various orphanages across the country, with the proceeds of this concert benefiting orphanages in the Intermountain region.
Date: Friday, April 22
Doors: 6:00 p.m.
Show: 7:00 p.m.
Venue: The Post Theater - 245 South Fort Douglas Blvd. Bldg. 636
Price: $10  (family friendly)
Tickets available from band members (sans the service fee), or through SmithTix
Charity: A portion of the proceeds will benefit The Children's Home Society.
Corporate Sponsors: Zions Bank, Ben & Jerry’s Ice Cream, and Artistic Printing
About the bands:
Heather's Headache just released its third album, titled Revolution. HH has a sound that is a mix of U2, Muse, Coldplay - the strong musical melodies and thought-provoking lyrics set the band apart from other adult alternative bands. The band plays frequently for charitable events. Music can be found on Facebook  and iTunes.
ENZ is a new Salt Lake based band, although founding members Dylan and Parker Ence have been playing acoustic sets in the area for years. ENZ has a sound that is a cross between Jack Johnson and Maroon 5 - an upbeat, driving tempo and subtle guitar textures. Music samples can be found on Facebook

I have carried my little boy in a baby carrier since he was born. I love the convenience of strapping him in and not worrying about the hassle of a bulky stroller. It's also a comfort to hold my little guy close and safe. When I had the chance to review the ERGObaby carrier, I was thrilled to try something that could extend my baby wearing days.


My first test was a true one...Costco. I admit that I didn't really look at the directions when I put the carrier on in the parking lot. But I didn't need to! After one look at a picture in the user manual, I strapped my 20 pound boy in, placed my little girl in the shopping cart, and started on my way through the aisles of Costco. I immediately noticed that the carrier more evenly distributed my son's weight than my normal carrier and held my boy high so my legs weren't bumping into his. This made it significantly easier to tote him around the store. Indeed my normal trips to Costco are exhausting. But after…
302 comments
Read more

By Veronica September 22, 2012
Gardner Village is a local treasure. If you've never found your way down there, October is the month to do it!  The shop owners love Halloween! The village becomes a witch village and many times, shop owners will even dress up.   On my most recent trip to Gardner Village, I stopped in at Country Furniture & Gifts which is a store very ready for Halloween.

The store is located in part of the old restored flour mill built in 1877 by Archibald Gardner in West Jordan, Utah.  The store is very family oriented and houses many built-to-last items such as dining room tables, sofas, beds and chairs.  They are also famous for their rug room where many of their rugs are still USA made. As they say, "A rug makes a huge impact for a minimum investment to any room."


The home accessories and giftware are amazing!  They have all sorts of decor for all sorts of personalities. Please be sure to pay them a visit.  It's worth it!
If you're an interior designer, you might quali…
4 comments
Read more

YUM!  I used a seasoning packet to make a Chimichurri Burrito Casserole and it was SO good!  I've always liked Lawry's products and I'm excited to try them all!
Also I LOVE skewers!  We had a family get together a couple weeks ago and everyone brought meat and vegetables to put on skewers.  I wish I took pictures because they were so pretty!  :)  As you know from some of my previous food photos...sometimes good food ain't as easy on the eyes..lol  --Burrito casserole was also good lookin'. :)

Here's how to win a Lawry'…
239 comments
Read more