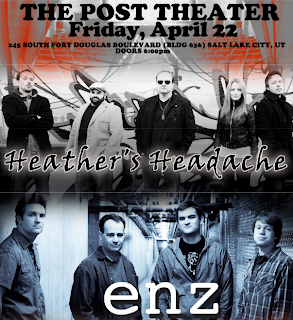 Zions Bank presents an evening with Heather's Headache of Washington, D.C. and guest band ENZ, of Salt Lake. A portion of the proceeds will benefit an orphanage organization designed to raise the quality of care at various orphanages across the country, with the proceeds of this concert benefiting orphanages in the Intermountain region.
Date: Friday, April 22
Doors: 6:00 p.m.
Show: 7:00 p.m.
Venue: The Post Theater - 245 South Fort Douglas Blvd. Bldg. 636
Price: $10  (family friendly)
Tickets available from band members (sans the service fee), or through SmithTix
Charity: A portion of the proceeds will benefit The Children's Home Society.
Corporate Sponsors: Zions Bank, Ben & Jerry’s Ice Cream, and Artistic Printing
About the bands:
Heather's Headache just released its third album, titled Revolution. HH has a sound that is a mix of U2, Muse, Coldplay - the strong musical melodies and thought-provoking lyrics set the band apart from other adult alternative bands. The band plays frequently for charitable events. Music can be found on Facebook  and iTunes.
ENZ is a new Salt Lake based band, although founding members Dylan and Parker Ence have been playing acoustic sets in the area for years. ENZ has a sound that is a cross between Jack Johnson and Maroon 5 - an upbeat, driving tempo and subtle guitar textures. Music samples can be found on Facebook