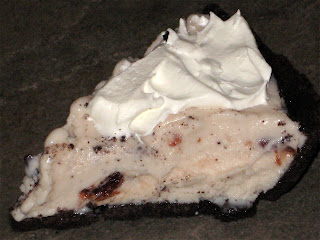 Yesterday was my husbands birthday.  I had two goals:
1. stay within budget
2. involve my two year old as much as possible
Regarding #1  I bought some Ben & Jerry's ice cream, used an oreo pie crust I got from Walgreens months ago, and used cool whip I got for free!
I used two of my groupons to buy him gifts (gifts that he wanted even!)  One was from the Nutty Guys, they have great gift boxes!  And the other was from a local bakery.  Who doesn't want bakery goods for their birthday??
I also used swagbucks to take the sting out of an Amazon purchase for him. :)  I would tell you what it was but he doesn't have it yet.  I was a little late ordering. lol
Now involving my daughter.... It was actually really fun.  I took her to the Dollar Tree and let her pick out a present for him.  She even used her OWN dollar. :)
She picked 2 packages of M&M's and a witch.  (lol)  She kept saying..."open up the Sea Witch Daddy!"---she's been watching the Little Mermaid. 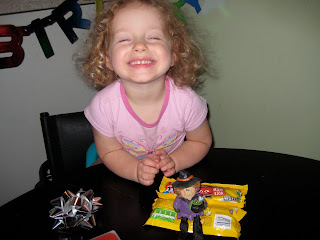 Then I found some paper and I had her draw some pictures on them.  Best wrapping paper ever!  I save ribbons and bows so I pulled out the stash and let her pick what to use.  FUN! 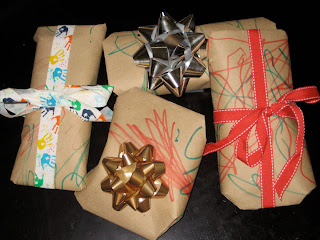 Dave and Nicole Simister said…
I like how you involved your 2 year old. Do you have other ideas on getting 2 year olds involved with what you're doing?
August 25, 2010 at 9:06 PM

Audrey @ Tight Wad in Utah said…
Noelle - He did love them. I didn't mention this in the post, but she actually broke the witch..lol..so we went to buy it and the cashier just gave it to us. NICE! So he even liked his one-legged witch..LOL

Dana @ The Coupon Challenge said…
What awesome tips! Your daughter is adorable! I'm waiting to use my Nutty Groupon- they were all out of the cajun nuts hubby wanted.