My Cereal Stock Up Today 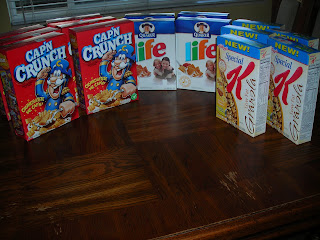 This morning, I went to Target and Smith's for, among other things, cereal. Both stores have AWESOME cereal deals this week! I decided to just take a picture of the cereal this time. I have 15 boxes that I purchased today. Total cost? $6 plus tax!!! Nice! Each box was .40.
Go here to see how I did the Quaker deal at Smith's.
Go here to see how to do the Kellogg's deal at Target.

Also, it is being reported that, although the Smith's ad states one $5 off deal per transaction, many people have been able to do multiple sets (10 or 15 boxes) of cereal at a time and the $5 is coming off for each set of 5. I did mine in 2 transactions, you may want to double check with your cashier beforehand.