By Audrey @ Tight Wad in Utah April 17, 2010
First, let me just say that I have never made quiche before.  But even a beginner like me can make magic happen. :)  It was amazing! 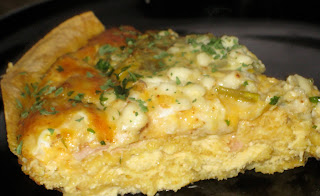 Corn Tortilla Quiche
I followed the recipe pretty closely but I did make a couple substitutions.
Instead of sausage, I used bacon (almost a whole package).
Instead of whipping cream, I used evaporated milk.
And instead of Monterey Jack cheese, I used Mozzarella.
I also DOUBLED the recipe.
While the bacon was cooking:
I preheated the oven to 350
Greased 2 pie plates-- use a 9-in, if you use an 8-in be sure not to put too much in it.  I learned the hard way and now there's egg in the bottom of my oven :)
Arrange tortillas-- four overlapping, 1/2-in beyond rim 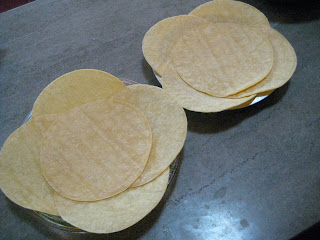 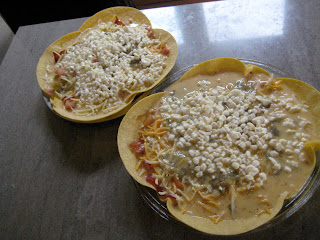 Then bake for 45 - 55 minutes until center is set.  Sprinkle with cilantro (I used dried) and your done! 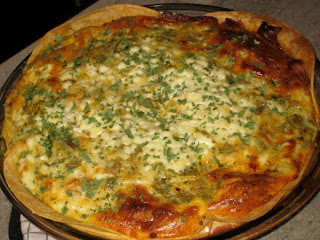 I made 2, we ate one and I froze the other one.  First I let it cool completely, I wrapped it in plastic wrap, then in foil, then labeled it in a freezer bag...overkill?? maybe.  The second one I baked in a pie tin....but again don't put too much filling in it or you your husband will be cleaning your oven! :) 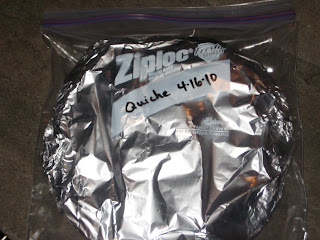 I've read that quiche freezes really well.  Reheat until heated through.  It really was good...
Be sure to reference the recipe for better instructions :)